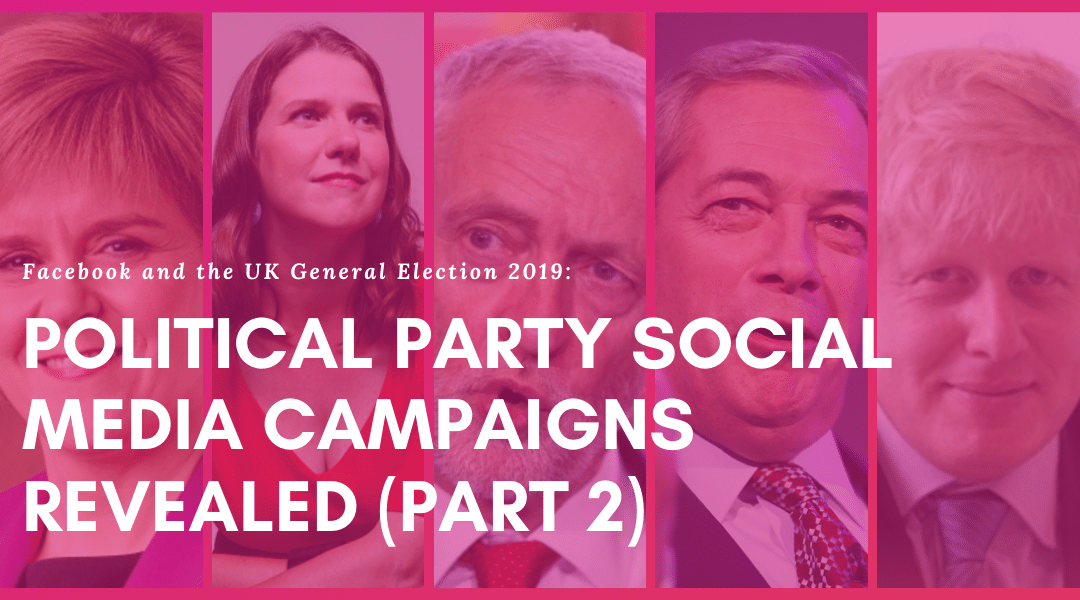 Ready for the results of the 2nd week electioneering? There have been some significant changes since last week.

Check out the latest ad campaigns the major political parties have been running over the last 7 day on Facebook and Instagram.

The Tories have spent £50,478 on Facebook and Instagram ads since last week on a total of 13 ads. Nine of the ads are critical to other party leaders but none of them have taken a pot shot at the Lib Dems yet. I wonder why?

Many of them are newspaper commentaries that they are sharing with commentary to give extra validity and authority to the news.

From an organise perspective, the Conservatives have put up an incredible 117 pieces of content which has been lapped up by 2.4m fans. The most popular of which was a 4 minute video that was liked by 11k, with 3.8k comments and 7,589 shares.

The Labour Party on the other hand has spent £55,576 in the last 7 days and has pitched 101 ads onto Facebook and Instagram. But they’re not 101 different types of ads with different creative messages. They are around a dozen different ads targeted at a dozen different demographic and geographic populations across the UK.

From an organic, non paid perspective, the Labour Party have put out 69 posts in the last 7 days which were lapped up by 1.3m engaged fans. The best performing organic post was a graphic summary of their key pledges during the General Election. This post was liked by 16k, commented on by 1.6k and shared by 6,905 highly engaged fans.

From an organic perspective, the SNP party posted up 21 posts and got 228.6k engagement on all their posts over the last 7 days.

The best performing organic post was a high production video that looks like a TV ad for Scotland and has a voice over by a famous actor (Ewan McGregor?). The post was liked by 3.2k, commented on by 273 people and shared by 2,256 fans.

The LibDems spent an astonishing £66,614 on Facebook and Instagram ads and have posted a total of 3,900 ads over the last 7 days. Interestingly, it looks like they have gone through every constituency and targeted all the marginals. Very tactical!

From an organic perspective, they’ve posted up 61 pieces of content in the last 7 days with 258.9 fans engaging with the posts. The most popular piece of content was a video where Nigel Farage predicts the ‘nightmare’ of Liberal Democrats winning a majority and delivering a 2nd referendum. This video was liked by 799 LibDem fans with 195 comments and 293 shares.

The Brexit Party spent £21,906 on 390 ads. Interestingly, they have gone for more highly effective content by targeting AND mentioning each constituency in the ads.

From an organic perspective, the Brexit Party put up 83 posts with 1.1m engagement from their fans. The most popular post was the announcement of the entrepreneur Michelle Dewberry standing as a candidate for Kingston upon Hull West and Hessle.

Based on these results, who do you think is going all out to win? Who has the best ads or organic content strategy? Do you even think the election will be decided by social media ads and posts? And to what extent do you think social media from the political parties influences the voting public’s decisions.

I’d love to hear your views. Scroll down and leave a comment below.

Check last week’s post on The State of Political Advertising Today for the first in our series of reviews of the Facebook and Instagram ads and organic content strategies of the main political parties in the run up to the general election 2019.